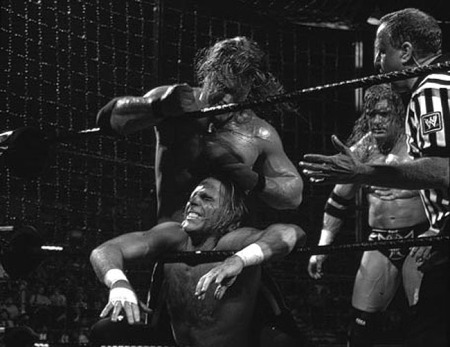 Over ten years ago, the Elimination Chamber was born – Source: vb.3rby.net

The following is a piece from our resident non-wrestling fan David Smith. As usual, I sent him a YouTube video of a wrestling match, and he sent me his thoughts on it. I decided to show Dave the first ever Elimination Chamber match at Survivor Series 2002, featuring the all star line-up of Triple H, Shawn Michaels, Booker T, Chris Jericho, Kane and Rob Van Dam. Every single one of those guys have been a World Champion either  before or since then. They were all arguably in or around their prime at the time of this match. The stipulation was being experimented with for the very first time. Everything aligned to produce something very memorable. Let’s see what Neutral Dave thought. Craig [Editor]

From these selections I have been given, there is one thing that I particularly enjoy, and that is storylines. I love watching characters struggle in tough situations. I adore the action genre, and that comes from a connection with characters like John McClane. In this particular match, I did not feel that so much. However, I would like to reserve ,as it is very possible that watching this out of context is akin to watching the finale of a TV show without seeing any of the build-up. For that reason, I was not aware of the stakes this match held for the participants involved.

Another part that took me out of it a bit was the build-up. The music that was used was not particularly badass or intimidating. They are usually good at selecting music which can get you in the mood for a high stakes match. Also, the Elimination Chamber itself was given a particularly over-stylised introduction. While watching these sequences, the chamber seemed to be based on the fallacy that to be weighty the whole world needs to be threatened. The standard cage provides an imposing threat on its own, reminiscent of the Death Star, a lot down to its own build up. However, during the match itself you can see how cruel a chamber it really is.

The athleticism from the different wrestlers is what I have come to expect. Their physical abilities continue to impress and amaze me. This is where my love for story comes in. As I had, due to my own admitted lack of knowledge, no context in which to root for any particular characters, I was not emotionally connected. I do find this to be a harsh criticism though. In the more cold part of my brain, I do see these extremely good pyrotechnics, stunts and special effects being weakened by a poor script. Then a part of me believes that this is pretty unsympathetic considering that the stunts and pain cannot be called cut on. I still maintain my appreciation for the physical work involved. I still gasp and awe at particular moves.

I found the order in which people went out to be interesting. Triple H aside, they were eliminated close to the order in which they came out. Triple H staying until the very end was pretty cool and showed how much he can take, as befits a belt holder. Van Dam beat him up pretty early on, which made him less of a threat. The other wrestlers did do what I would have done: double up against the strongest and then take on someone who is hopefully more knackered than you are. While Triple H was not the most exciting to watch, you have to give him credit for surviving. The biggest proponent of the aforementioned strategy was Jericho. It shows that while it is an effective strategy, it does not get you much sympathy with the audience. I found Jericho to be someone who mostly took advantage of other people’s work, and with none of the grace or style of his rivals like Booker T or Shawn Michaels.

Apart from Jericho, I enjoyed each wrestler as they came out and in their own way seemed to dominate the match for a bit and then fall foul, perhaps of their own cockiness. This is most apparent from Van Dam who made a mistake when he jumped from that pop down onto Triple H. I was happy with Shawn Michaels’ victory, possibly due to him being the freshest in my mind. I did like his style and the contrasts between him and Triple H.

On the whole though, what seemed like a lack of context made it not the enjoyable experience that wrestling has become for me. 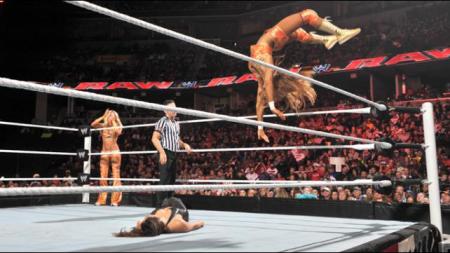 Eve displays her athleticism with a fine moonsault – Source: WWE

After Neutral Dave’s first piece received such warm praise, I decided to send him over another video. I got many match suggestions from people and went for Eve Torres v Brie Bella. The match was about four minutes long, and was taken from an episode of Monday Night Raw. I know it’s not a classic match, but I was just fascinated to see how he interpreted it, as a neutral. If you like these features, hit ‘Follow’ and get more. Also, leave comments and keep the match suggestions coming in! Craig [editor]

This match had less context around it so I only judged on the proceedings themselves; just to see if my reading was different from people who have seen the whole story.

As this is a more recent match it seems that the directing has tightened up. With the more classic era wrestling you can sometimes see the joins where the punches are pulled in order to not completely immobilise each other. Here it is seamless and it does look like both Eve and Brie Bella have taken the full force of the violence that has been dished out.

It is also really nice to see how agile the combatants are. There is almost a ballet-like quality to the way they move (especially Eve) which shows how far away wrestling is from the popular conception of two brick shithouses lumbering at each other.

While there was not much context to use, I gravitated towards Eve. This was partly because of her aforementioned wrestling style which was a joy to watch. I also felt really sorry as she had only lost because of a pretty shoddy trick by the Bella twins. She was winning and they didn’t even get called out on their shenanigans by the ref. This might be because in the context of the writing as Eve was the reigning champion she needed a fall.

The twins themselves came off as villains of the piece. They seemed pretty ungracious in victory, giving the ‘loser’ sign to Eve when she was down and their propensity to cheat by pretending to be each other as the commentators noted. In terms of acting they did play these qualities well judging from my reaction.

While it was short, it was a shocking match due to the surprise ending. I would have preferred it to have gone on longer and watch more of this style of wrestling. However it has peaked my interest in more and I am going to be watching more Eve Torres matches. 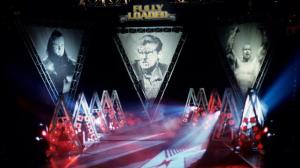 So I had a new idea for a feature. I have a friend who didn’t really watch wrestling so much as a kid, doesn’t watch it religiously now, but has a genuine interest. I thought it would be really cool to see wrestling through the eyes of an adult being properly introduced to it. I sent Dave a video of the match at Fully Loaded 1999 between Stone Cold Steve Austin and The Undertaker. If Austin lost, he could never compete for the title again. If Taker lost, Vince McMahon could no longer appear on WWF television. This is one of my favourite matches from the beloved Attitude Era. Let’s see what my newest correspondent made of it.
Craig

The thing with getting into wrestling (as with all long running shows, or even sports) is that there are worries about how vast a body of material there is and where to start. Therefore, credit must be given to the makers of Fully Loaded. Through flashbacks and the commentators (who could make paint dry seem exciting) put everyone up to speed. In the minutes before the match, we understand to some extent the relationship between these two fighters and what it means to them.

Another way this is shown is through the acting of both Steve Austin and Mark Calaway. From all that I have seen wrestling is an underrated art form and I do stress that term. Wrestling is a theatre performance with the extra pressures of their being no stage exit and the fact that they have to knock the stuffing out of each other. The hatred between these two and likable bastard boss Vince McMahon was apparent.

The production must also be praised. As it is recorded live, finding the right camera shot to trick the viewer (Psycho style) that these blows have really hit with full force is paramount. While I did notice some joins, the majority are carried off really well.

One aspect of the fighting I find interesting and dramatic is the slowness of the early stages, where the combatants move slowly when they are hurting each other. I enjoy this as it shows that they are battle weary. For The Undertaker in particular, this adds to his badass persona. He is Death, he can take his time if he wants to, but he is still going to get you and fuck your shit up. This made him my favourite to win this match. I have never been a huge fan of Stone Cold, as his persona is mostly that of a redneck, which reminds me of the worst stereotypes of conservative America. I still think it is an injustice that he beat the Adonis that is The Rock. However in this situation, Austin represents the fight against the corporate exploitation that McMahon tries to get away with. So his victory is something you can still wish for. Especially with the odds against him; even one of the commentators seemed to be out to get him. You can truly invest yourself in both of these characters.

My favourite part of the match was actually after the titular first blood was drawn. Then it just seemed that Stone Cold and The Undertaker just went for each other regardless that the match was finished. The Undertaker, incredulous that this could have happened to him seemed to take this blow on his person even more personally.

Therefore it seems rather churlish to dismiss wrestling because it is all fake. I think those injuries must hurt quite a bit actually. While you know that what goes on isn’t literal reality as with any story, with well-drawn characters it feels real enough.